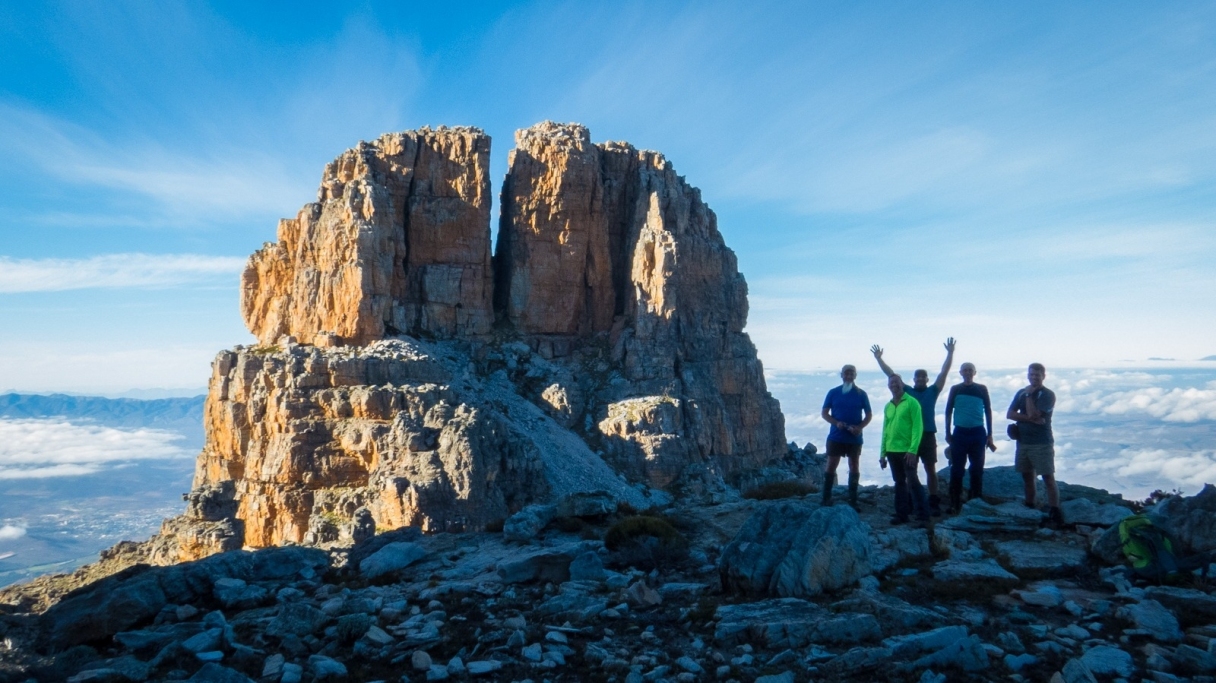 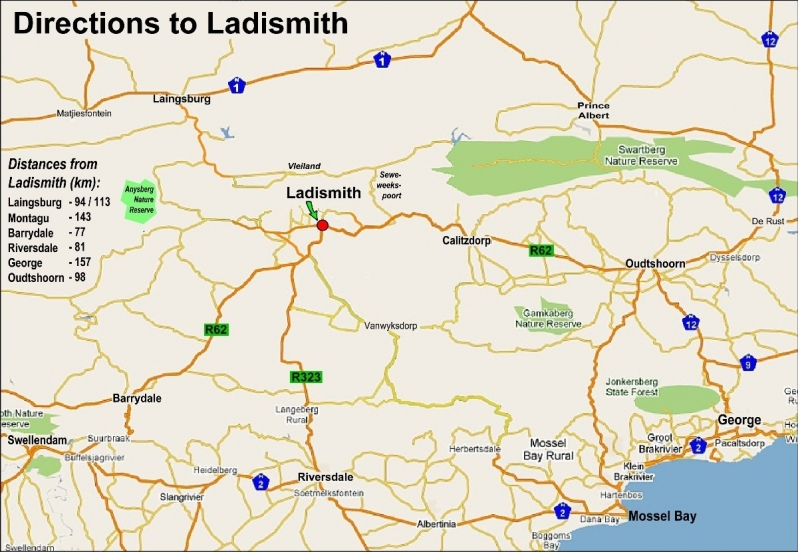 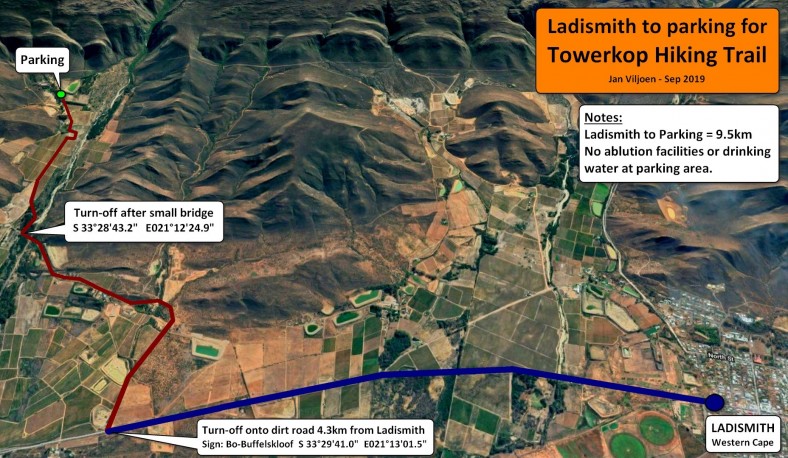 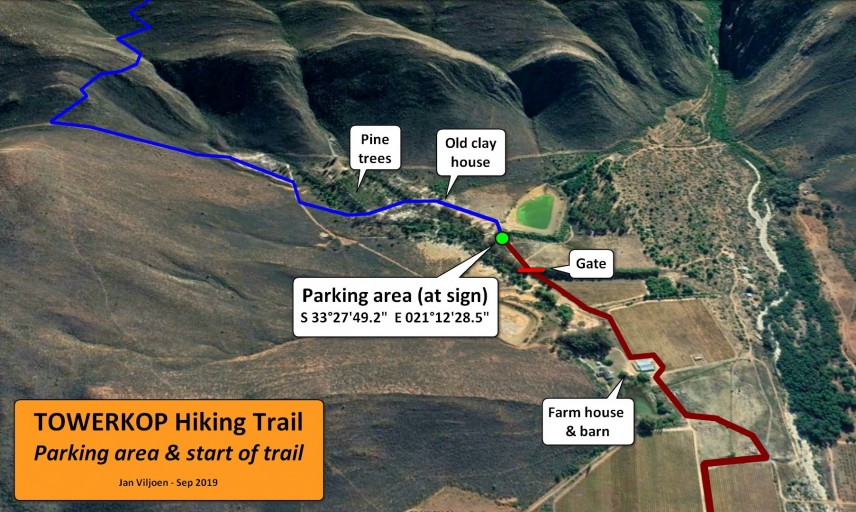 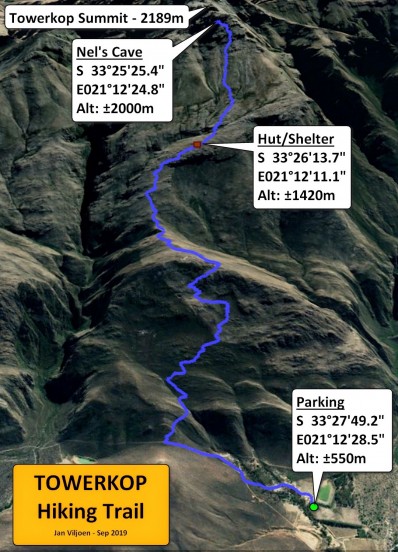 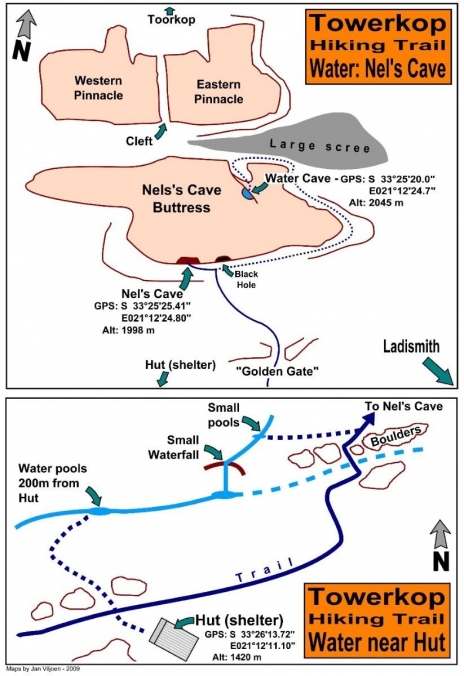 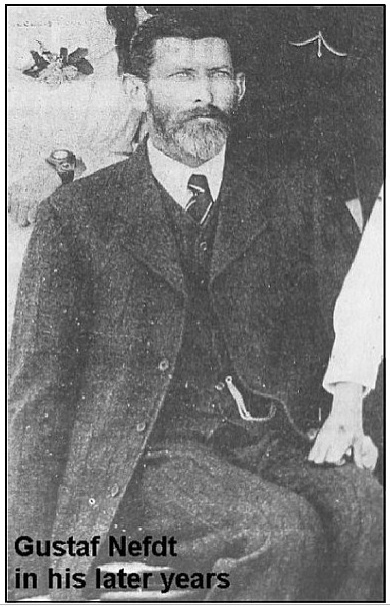 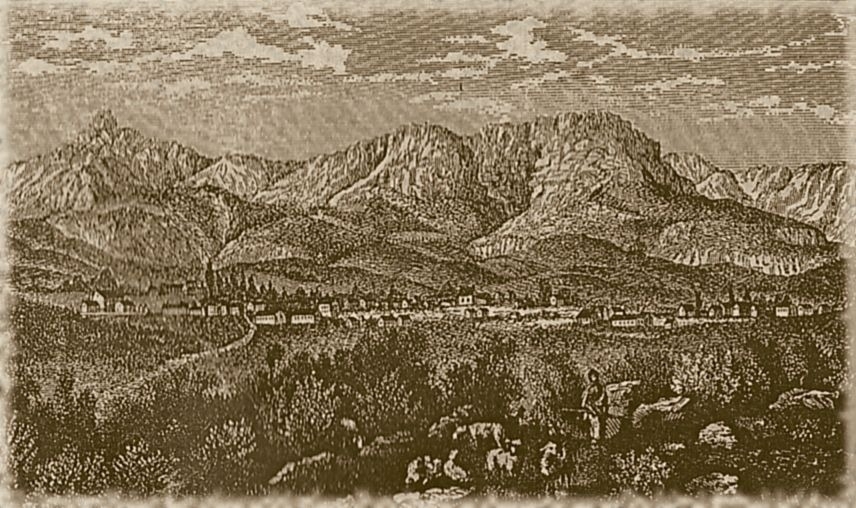 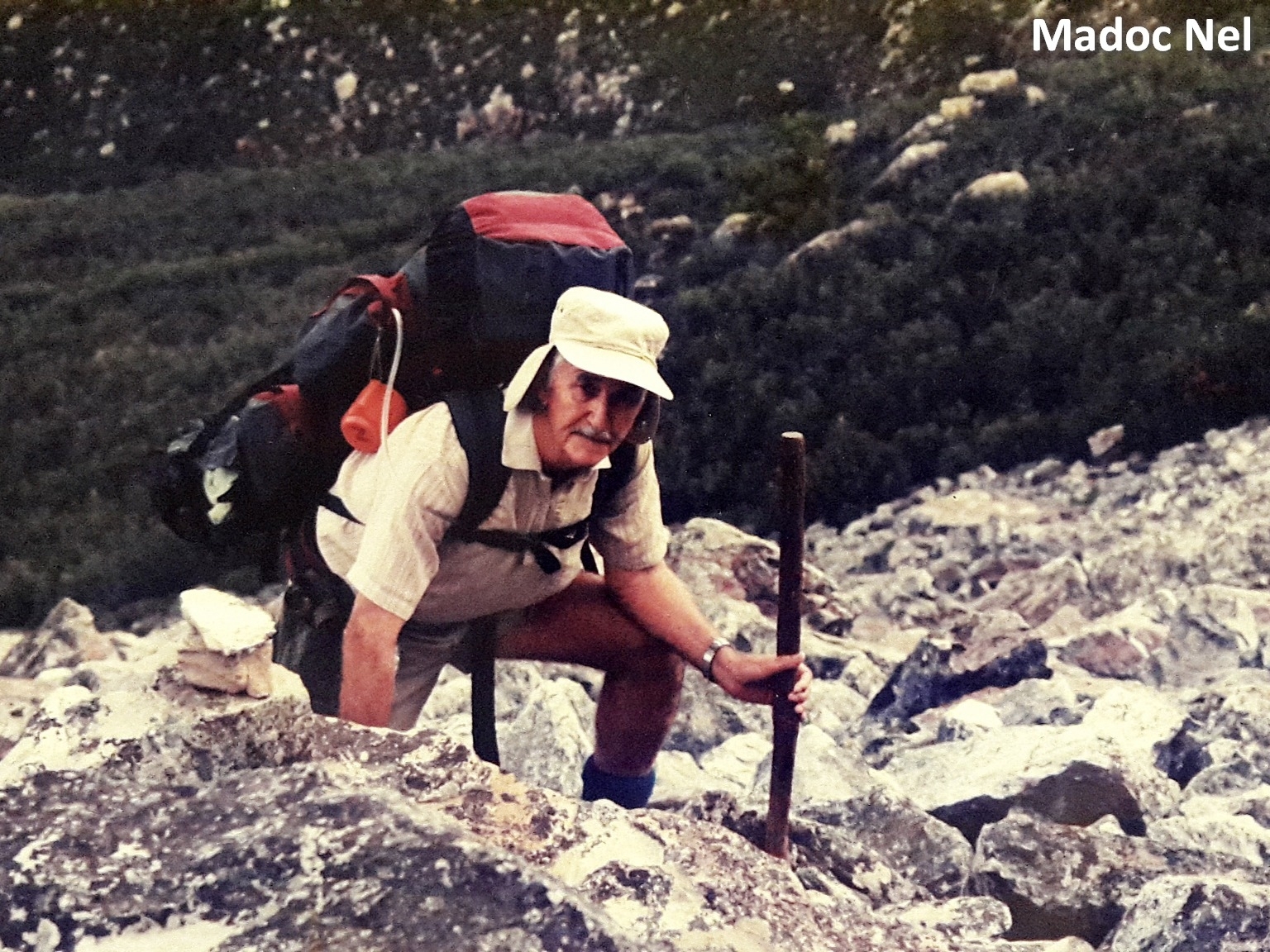 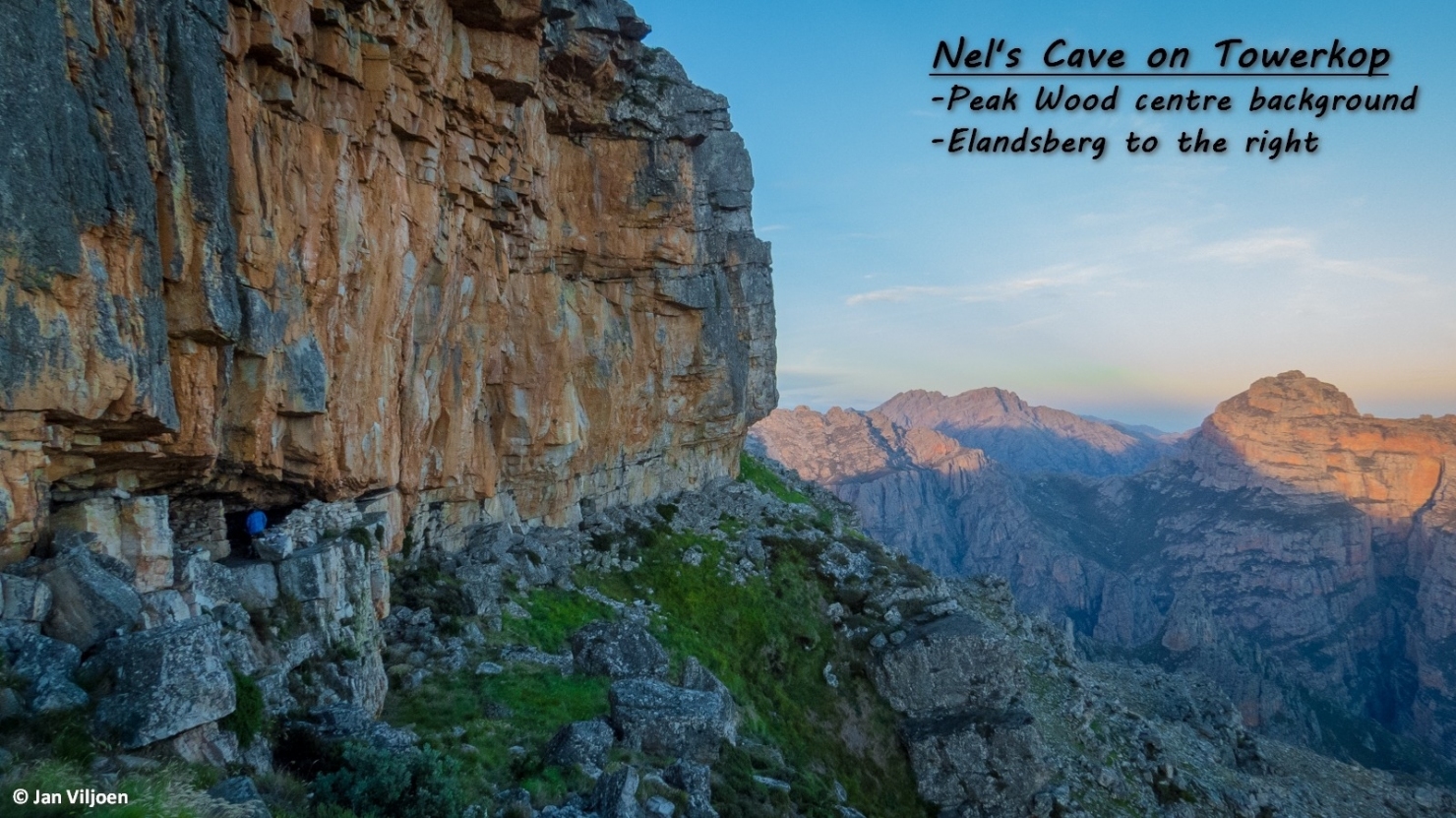 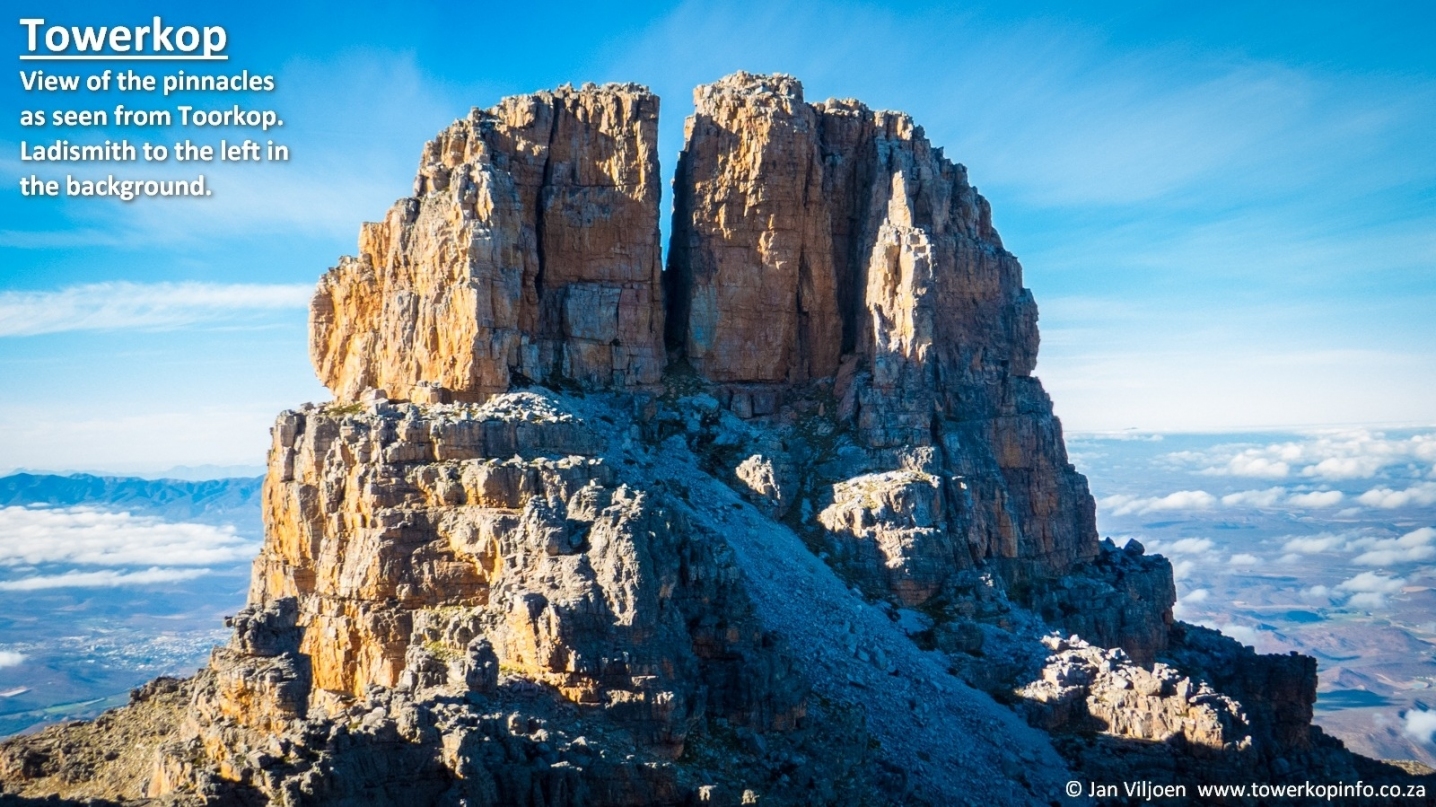 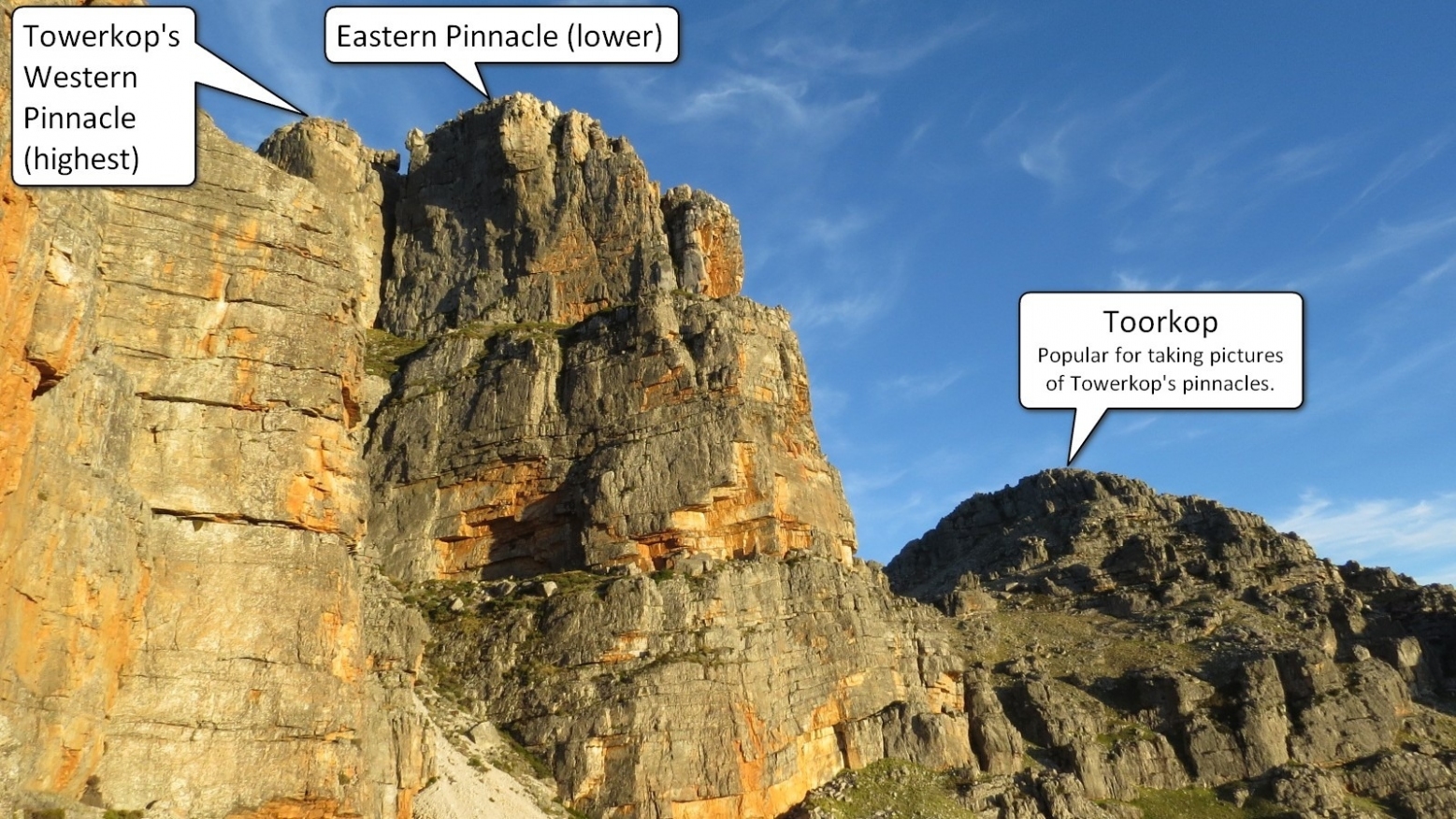 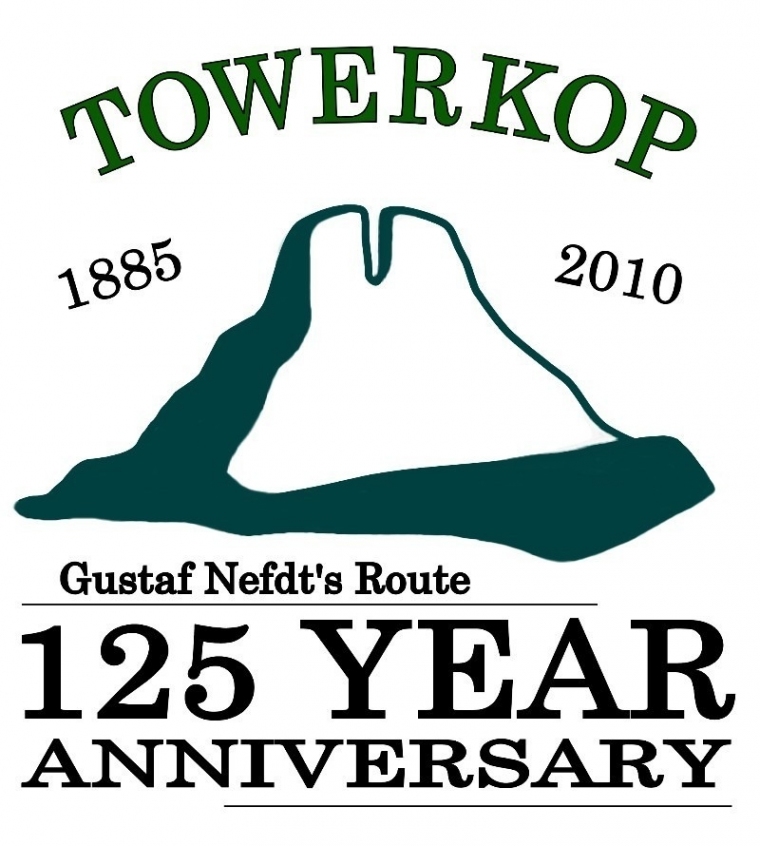 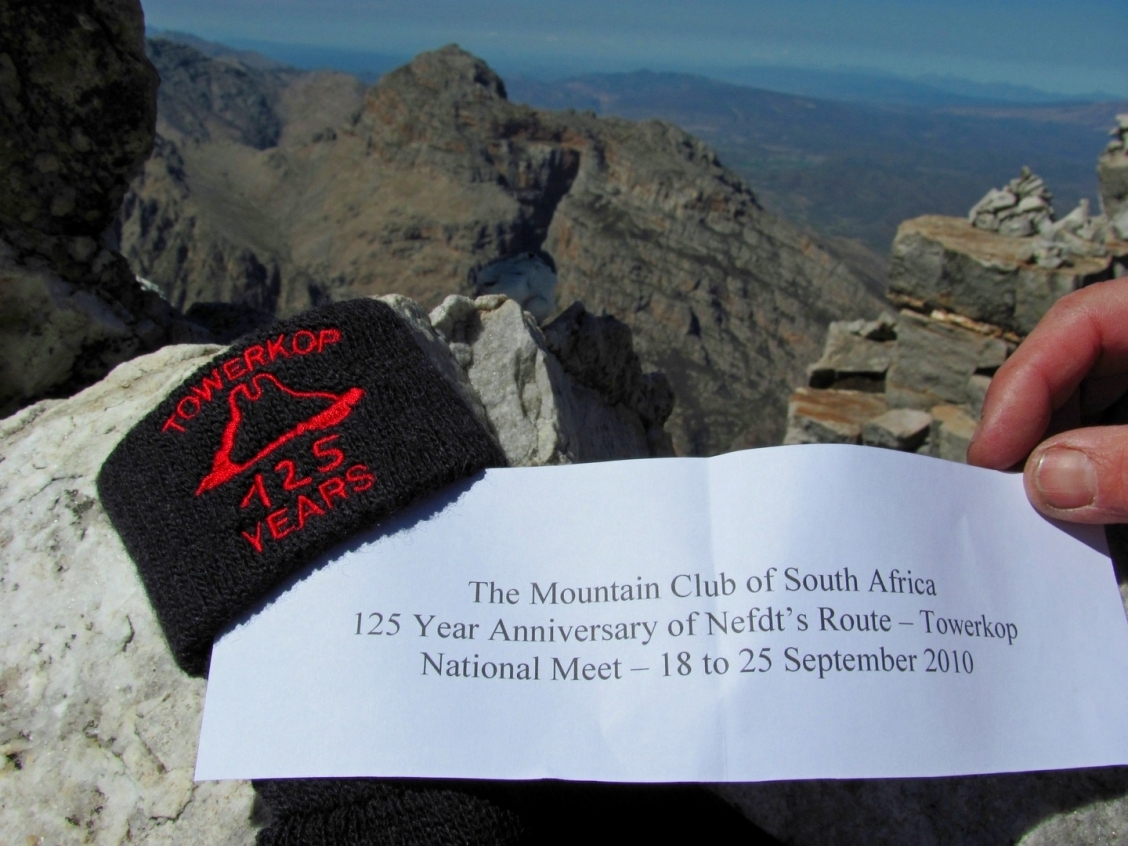 Towerkop (2189m) is one of the five major peaks in the Klein Swartberg range, the highest being Seweweekspoort Peak (at 2325m the highest peak in the Western Cape).  Towerkop’s famous split divides its summit into two almost identical pinnacles.  To the south of the pinnacles is Nel’s Cave Buttress, where Nel’s Cave is located at its south face.

The Towerkop mountain area is the property of the Mountain Club of South Africa and private individuals.  You need prior access permission from the MCSA's convenor of these properties, Mr Jan Viljoen.  Please contact him with your details (dates, group size, group leader, etc.) at kleinswartbergbookings@gmail.com or Whatsapp to 083 698 2973.

Parking and the trail's start is on the farm of Mr La Grange Volschenk and he also needs to be informed of your group size, number of vehicles and dates of your trip.  Please call him on 028 5512 037 or 083 378 1040.  No ablutions or drinking water exists at the parking area – please fill water bottles beforehand (±3lt per person).  Parking is allowed only at the parking sign, DO NOT drive your vehicle up to the old clay house as in former years.  Please refer to the GPS route, maps and photo's below in order to guide you, especially if it is your first visit.

From the parking area (at the sign), cross the dam wall and continue to an open field.  Start moving left (west) and look out for an old clay house under a large tree, from where on the trail becomes more obvious.  Especially from November to February the days can be very hot on the trail, with chilly nights.  During the winter months (April to Aug/Sep) snowfall may occur and proper cold weather gear is essential for such conditions.  From the parking a 3 to 5 hour hike (± 6km) will bring you to an old shelter known as the Hut.  With water nearby, bottles can be filled up for the last stretch to the cave, or the hut can be used as an overnight spot (max 6 people inside but some level areas nearby for tents).

From the hut another 2 to 3 hours’ strenuous hiking (± 2,5km) will bring you to Nel’s Cave under large orange rock faces.  In and around the cave some water drips exist, but water can also be obtained from the Water Cave, situated about 30 minutes from Nel's Cave (between Nel’s Cave Buttress and the Eastern Pinnacle).  Nel’s Cave can accommodate about 10 people and during holidays and Easter Weekends tents are recommended.  A visitors book in the cave contains accounts of hikers and climbers and can be signed.  Towerkop’s summit (both pinnacles) can only be reached via rock climbing routes, of which Nefdt’s Route is the best known.  Spectacular views of the surrounding peaks and valleys can be seen from anywhere on the mountain, but the best views of the pinnacles are seen from Toorkop, a small hill to the north of Towerkop.

The name Towerkop is derived from the Afrikaans words “Tower” (meaning Magic) and “kop” (meaning Peak).  Many still prefer the old Dutch spelling:  Toverkop.  Legend has it that this name was given after a witch was trying to fly home one evening, but the mountain kept looming higher in front of her.  Out of frustration and anger she thwacked it with her broomstick, and it split into two!  A more realistic origin of the name is probably from the fact that the mountain seems to change its appearance when seen from different angles.  In fact this is mainly caused by Nel’s Cave Buttress which can easily been seen from the west, but not from the south when it blends in with the main summit in the background.  To the unfamiliar eye this may seem unexplainable, even magical.

The first known attempt to climb Towerkop was made by a Mr Ziervogel and party in 1850, but their attempt failed through a severe thunderstorm, in which several of the party nearly lost their lives.  The peak was deemed unclimbable, and a bet of £50 was made in Ladismith that nobody could get to the top.  Then, in 1885, a young farmer named Gustaf Nefdt, made history in being the first person to climb Towerkop, and probably unknown to him at the time, he also opened the first rock climbing route in South Africa.  [Sources vary greatly on what his age was, claiming from 19 years to 23 years of age.  His first name is also either spelled as Gustaf or Gustav]

On the 24th of October 1885 Gustaf Nefdt woke early from where he and some friends have slept the night before.  They were camping on the plateau on their way to Towerkop, and leaving them asleep, Nefdt slipped off towards the summit pinnacles.  He had no prior rock climbing experience, but with pure determination he started off on the final face in bare feet and without a rope.  With genius use of modern techniques, he managed to get to the summit, leaving behind one of his socks he had put in his pocket.  [Another version claims that he removed his boots, but kept his socks on during the climb.]  The downclimb was even more difficult – Nefdt had slithered and fallen the last eight metres, escaping with only small scratches and bruises.  Arriving back in town, Nefdt found that he couldn’t collect the £50 wager since nobody believed him.  A party of farmers set out to have a try – and returned disgusted.  Nefdt was a fool and a liar, they said.  Not even a lizard could scale that face.

Nefdt was cross.  To regain his honour, he set out to climb the peak again.  He mustered a party with, amongst others, excise officers Melville and Stockdale, who were to act as witnesses.  At the base of the face Nefdt was searched. Then, to the amazement of his friends and witnesses, he completed the climb until he stood on a firm ledge near the top.   By means of a rope Nefdt then brought up two of his friends, Wapenaar and Theunissen, and the trio scrambled the last section to the summit where they recovered Nefdt’s sock from under a stone.  In 1906 the well known George Traverse-Jackson and a Mr Boothman made the third ascent with his route on the north face.  Around 1931 or 1932 [sources vary] a party consisting of AB Berrisford, PJ Burrell, AJ Singer and CJ Nel claimed the third ascent of Nefdt’s original route.  Years later some argued that their route had a slight variation, and that it was the 1947 party – Currey, Williamson, Russel and Keen – who made the true third ascent of Nefdt's original route.

In 2010 the Mountain Club of South Africa celebrated the 125th anniversary of Nefdt's feat when more than a 120 mountaineers gathered for a week of hiking and climbing on Towerkop and its surrounding mountains:  http://www.climb.co.za/2010/10/towerkop-national-meet-2010-report/

Mr CJ Nel (mentioned above) was a local Ladismith mountaineer and passionate about Towerkop.  Towerkop’s cave was named after him after he enlarged it with the use of dynamite from 1922 to 1926 in order to accommodate more climbers.  Since 1956 his ashes rest in the black hole near the cave.  His son, Mr Madoc Nel, has followed in his father’s footsteps and even went up to Towerkop for his own 80th birthday.  He’s been to this great mountain between 80 and a 100 times.  "Uncle Maddie" sadly passed away in June 2017, and his last wish was to have his ashes placed next to his father's, which was done during the Easter weekend of 2018 by a group of family members and close friends.  He will be dearly missed. 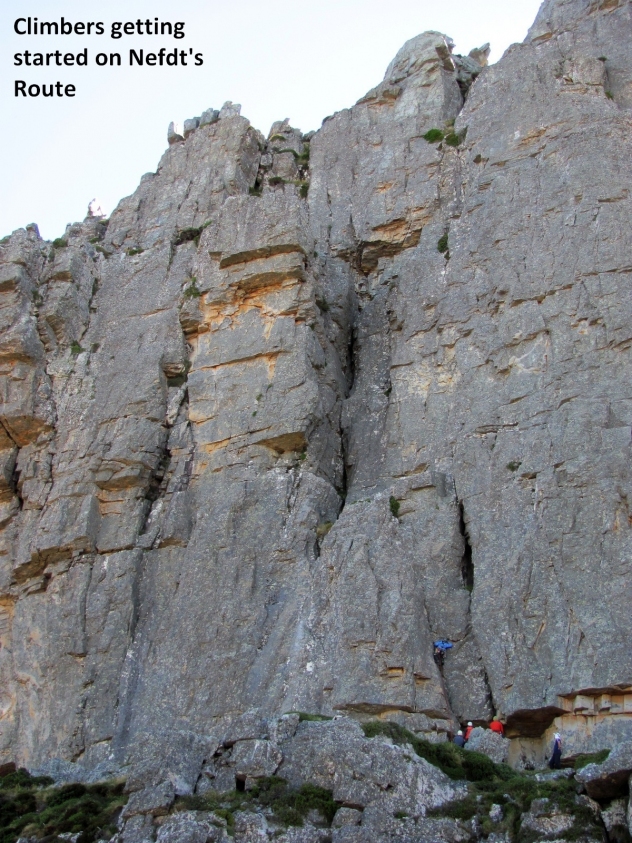 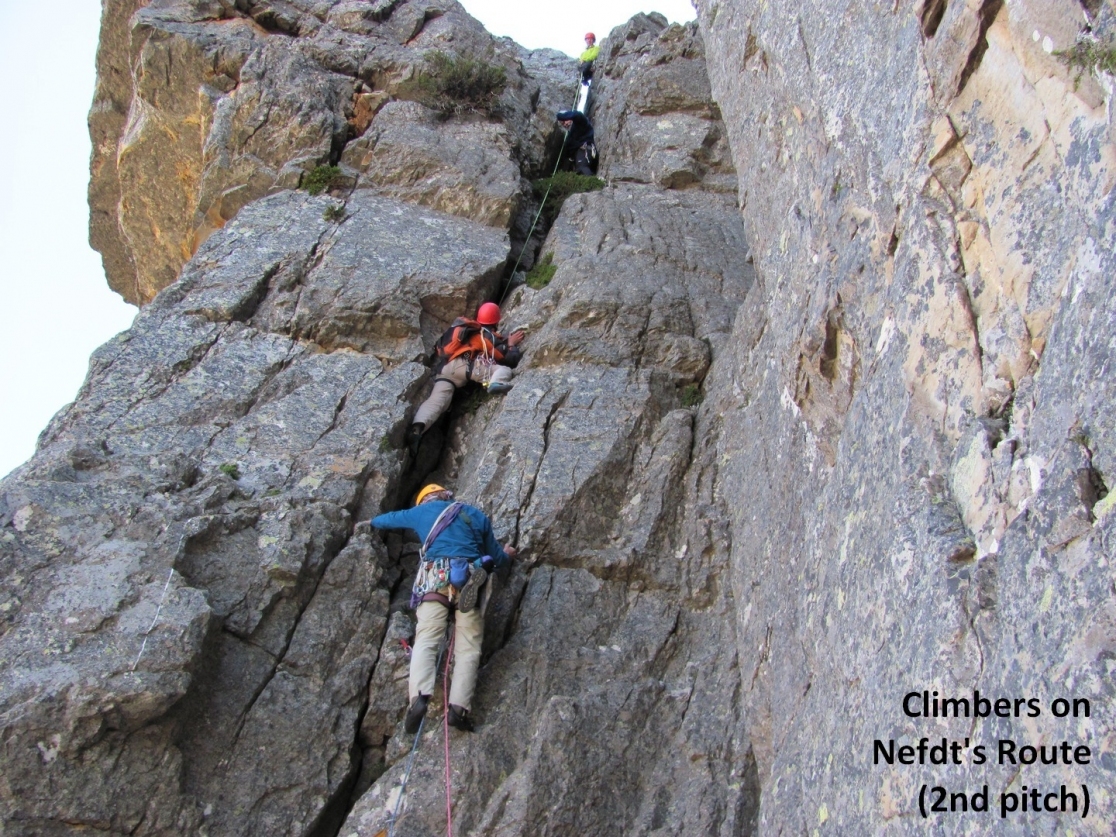 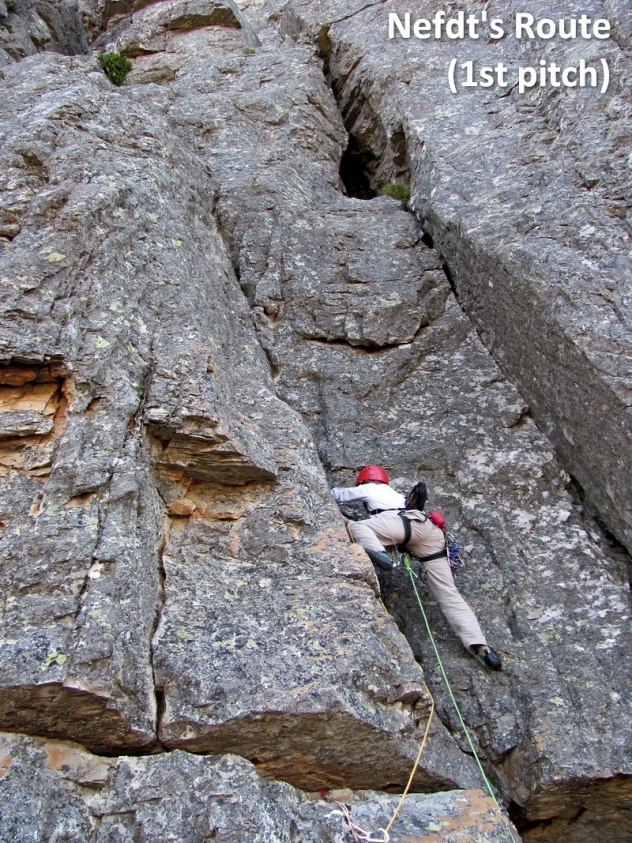 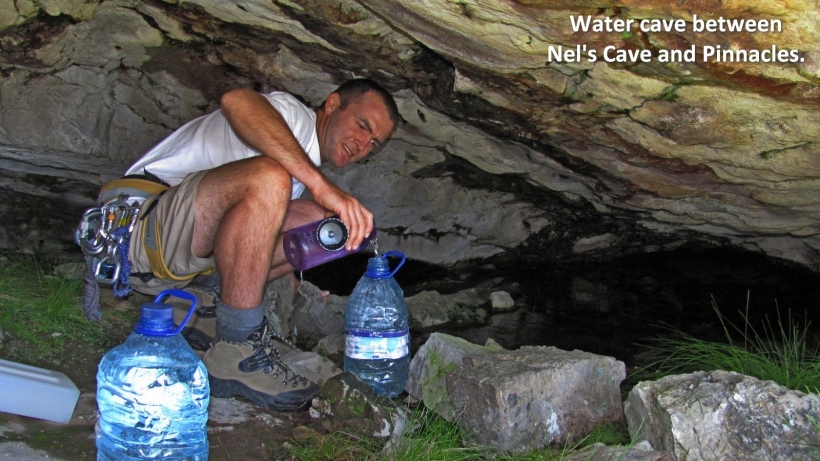 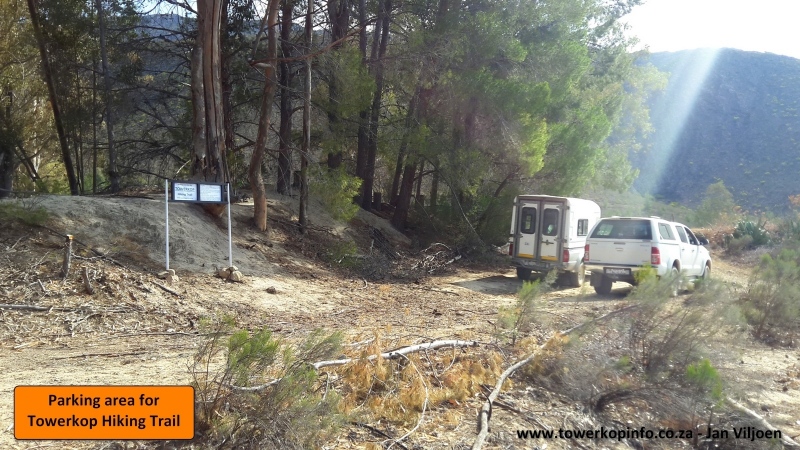 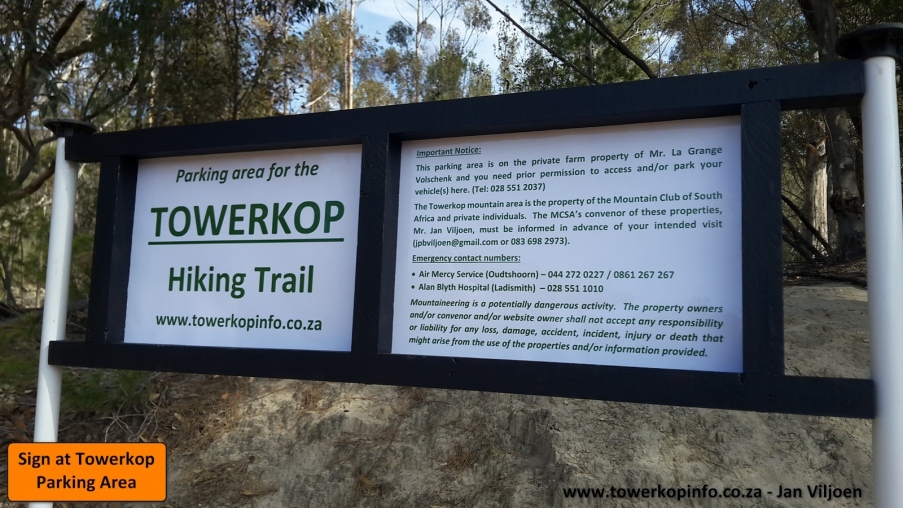 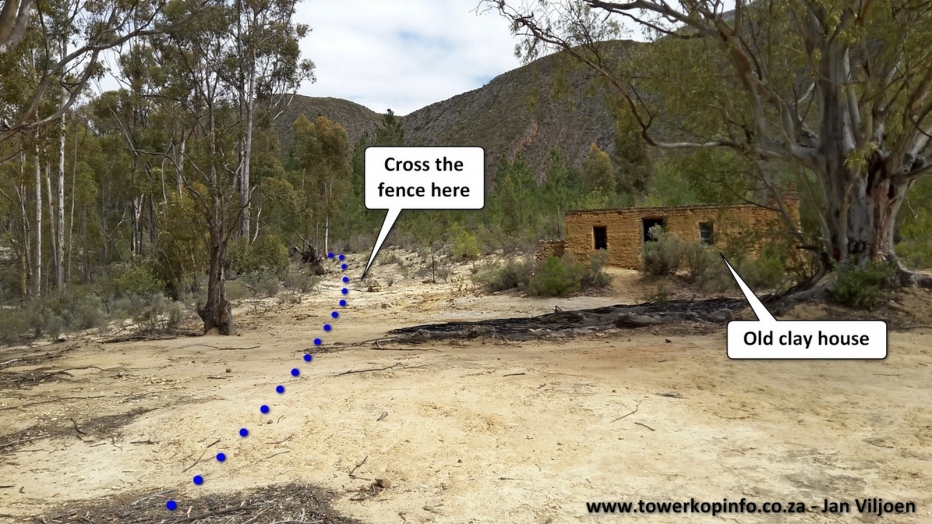 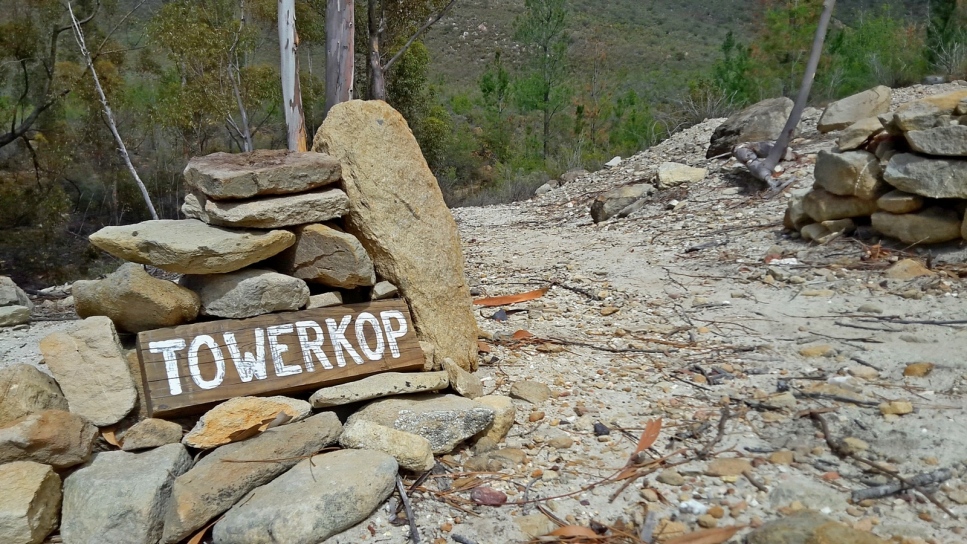 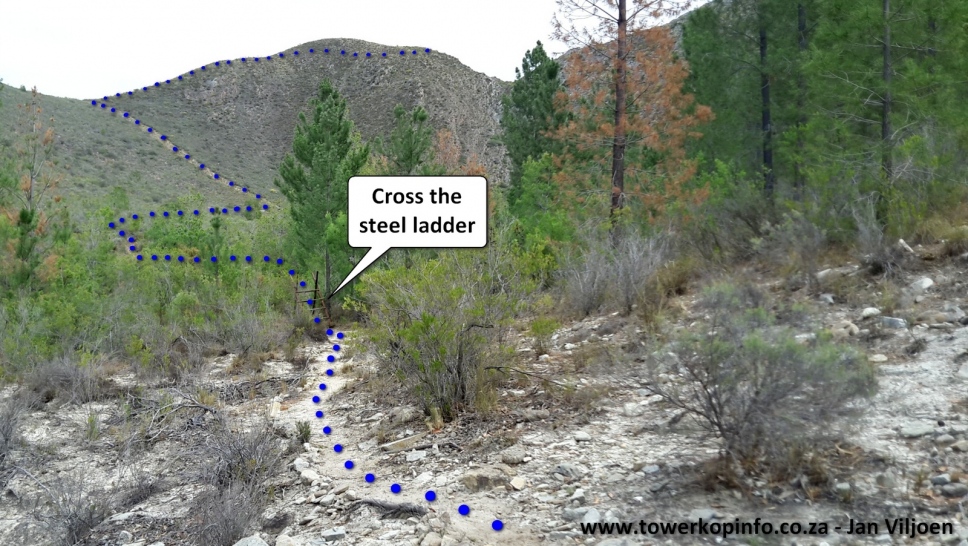